A paraplegic Marine dispatched to the moon Pandora on a unique mission becomes torn between following his orders and protecting the world he feels is his home.

Avatar is by far the best 3D movie ever made. I base my judgement on a variety of reasons.  The 3D is mastered to perfection. I wish that many other focal lengths were used as I noticed from personal experimentation that the 3D effect is better in higher focal lengths. Maybe in Avatar 2 or 3 or 4?

Regardless of one’s feelings about Avatar, James Cameron’s epic all-time box office champ was one of the most impressive looking films in motion picture history. Cameron has always been an “okay” story-teller in my book, but there is no question that Avatar borrowed heavily from Dances with Wolves and Pocahontas. You know where Cameron is going with the story; but nobody on planet earth or the fictional Pandora could have imagined where the famed director of Titanic, Aliens, and the Abyss was going to take filmgoers with this visual masterpiece shot in 3D.

Avatar has rightfully earned a place in history with its breathtaking visuals, enveloping soundtrack, and overall creative vision. It’s unlikely that any film on the horizon is going to touch its remarkable box office records; not even the six Star Wars films being redone in 3D. You can read Chris Chiarella’s review of the Avatar Ultimate Collector’s Edition, and for the most part we agree about the content of the film though I personally may not be all that enthralled by the story or message. Having watched Avatar more than a dozen times in the past few months has become somewhat tiresome, but I never cease to be amazed by all of the detail in each frame. As someone who doesn’t recycle or lose that much sleep over the state of the planet (it’s easy with so many of man’s foibles to contend with), I wasn’t overly impressed with the film’s moral teachings. I also didn’t buy into the “America is the bad guy” message that is so popular in Hollywood these days.  But there’s no denying that the film is a ground-breaking piece of work.

The Blu-ray 3D release of Avatar under review is now available.  Well, sort of.  If you’ve ever purchased a Panasonic 3D TV (even before December 1, when the Avatar Blu-ray 3D Disc first started shipping), you can get this disc for free via a mail-in rebate.  This is a nice touch from Panasonic as it does not leave the early adopters out in the cold.  For everyone else, the disc is available only in Panasonic’s 3D Ultimate Pack, packed with two pairs of Panasonic’s new medium-sized rechargeable 3D glasses.  This 3D pack is available for direct purchase for under $300 or you can find it as part of a 3D TV bundle in many places (like Amazon), so you can get it discounted or free when purchasing a Panasonic 3D-enabled HDTV.

Of course, you non-Panasonic 3D TV owners will probably be ticked off that the release is not available for direct consumer purchase without the Panasonic doo-dads — and rightfully so.  But the fact is, it was more lucrative for Fox to sell the exclusive rights to the title to Panasonic than it would have been to offer it for retail sale when the Blu-ray 3D market is so small.  And if Panasonic hadn’t ponied up the sheckels for the privilege, you could be sure that Samsung or LG (or another manufacturer) would have.  For those who don’t own a Panasonic TV, and don’t want to buy the title on eBay (or buy the kit and sell the glasses on eBay), a general release Blu-ray 3D version of Avatar is expected to be available in 2012.  Don’t shoot the messenger!

The Blu-ray 3D Disc itself is pretty bare bones: it features the theatrical cut of the film and does not contain any of the additional material available in the Extended Collector’s Edition.  In fact, it looks pretty much identical (in menus and content) to the initial Blu-ray release of Avatar released last spring, but now with 3D menus, and the 3D movie of course.  Consider this to be the same version you saw in the theaters.

Only a much smaller screen.

And even so… it rocks.

I would characterize Avatar (the 3D version shown in theaters) as breathtaking from a visual perspective. James Cameron spent years preparing for this shoot and the results speak for themselves. More than once, I reached out from my seat trying to touch the fauna in Pandora’s forests. Let’s face it; Cameron opened a Pandora’s Box (it was far too tempting) with this film and set the standard for all future 3D (and 2D) films.  The home version on Blu-ray 3D is equally as breathtaking, but it loses a lot of its impact on a smaller screen, so this is definitely something to consider when attempting to duplicate the theatrical experience at home.

One of my BIG issues with 3D is that it doesn’t look very convincing on a set under 54″ or 58″ in size, in most viewing rooms. It needs to fill your field of view to really work. Panasonic’s VT25 series plasmas are available in sizes up to 65 inches but they can get a bit pricey at that size.  I watched the Blu-ray 3D copy of Avatar on a calibrated 42″ Panasonic GT25 3D plasma HDTV and while I enjoyed the film very much at home (until the headaches started, though we’re not sure this is directly related), it didn’t blow me away. I own all three Blu-ray versions of the film (all excellent), but the 3D one is only the version to go for if you are going to watch it on a really big screen; stick with the 2D versions if watching on a 42″ model.

I have also had the opportunity to play with the 85″ Panasonic VX200 3D panel and I must say that the few clips of Avatar in 3D that I saw on that panel looked utterly jaw dropping. It made me want to own that set very badly. I have never seen such dark, inky blacks from any panel or projector. The level of detail present was simply astounding. There was certainly a small amount of noise in some scenes, but that’s like criticizing a Porsche Panamera Turbo sedan for being slightly noisy in 5th gear as you cruise up the Garden State Parkway (magical car…for the record). Nothing is ever going to be perfect; but for now the picture quality of the Blu-ray 3D is darn close. I saw no ghosting or cross-talk at all on either Panasonic 3D panel when watching this title.

The 5.1 DTS-HD Master Audio surround mix for this film is simply one of the best ever offered. Bass is deep, taut, and certainly capable of rattling your home with the right subwoofer. The final hour is a torture test for any system and I found myself turning it up until people started leaving the room because they couldn’t deal with the visceral impact of the sound. Dialog is very clear and easy to discern (even with all of the exploding ships and trees). The surround channels possess a wealth of information and are integral to the film; creating a more 3D aural experience (if that makes any sense). The clarity of it all also deserves a major thumbs up. This isn’t a jumbled mess, but a very structured and layered audio track that completely envelops. It is quite remarkable.

I’m not sure what the Na’vi word for “Zilch” is, but there is not one second of additional material on this release that I could find. Bupkus…as my Yiddish-only Bubie would have responded. It’s disappointing, but isn’t that why they released the Extended Collector’s Edition?  Look for a more comprehensive Blu-ray 3D version of the film in 2012.

Many years from now, when the entire 3D-thing has sorted itself out and become mainstream (if it doesn’t fall flat on its face and fail), people are going to look back and say that Avatar was the film that brought hope to the early adopters. I won’t go out on a limb and say that it is the best looking home video of all-time, but it is the best looking 3D film without a doubt. The surround track is one of the best I’ve ever heard and it made me appreciate the system that I own. The current reigning box office champ is sadly only easily available to folks snapping up a 3D set from Panasonic, but I suppose that if one were really desperate for it, they could just buy the Ultimate Pack and ditch the glasses (as they won’t work with a set from Samsung, Sony, or any other brand). My only real caveat about the Blu-ray 3D version is that it loses a lot of its impact on a small screen. If you can afford a 54″ or larger 3D set or a 3D projector, you are going to want this very badly. A landmark product. 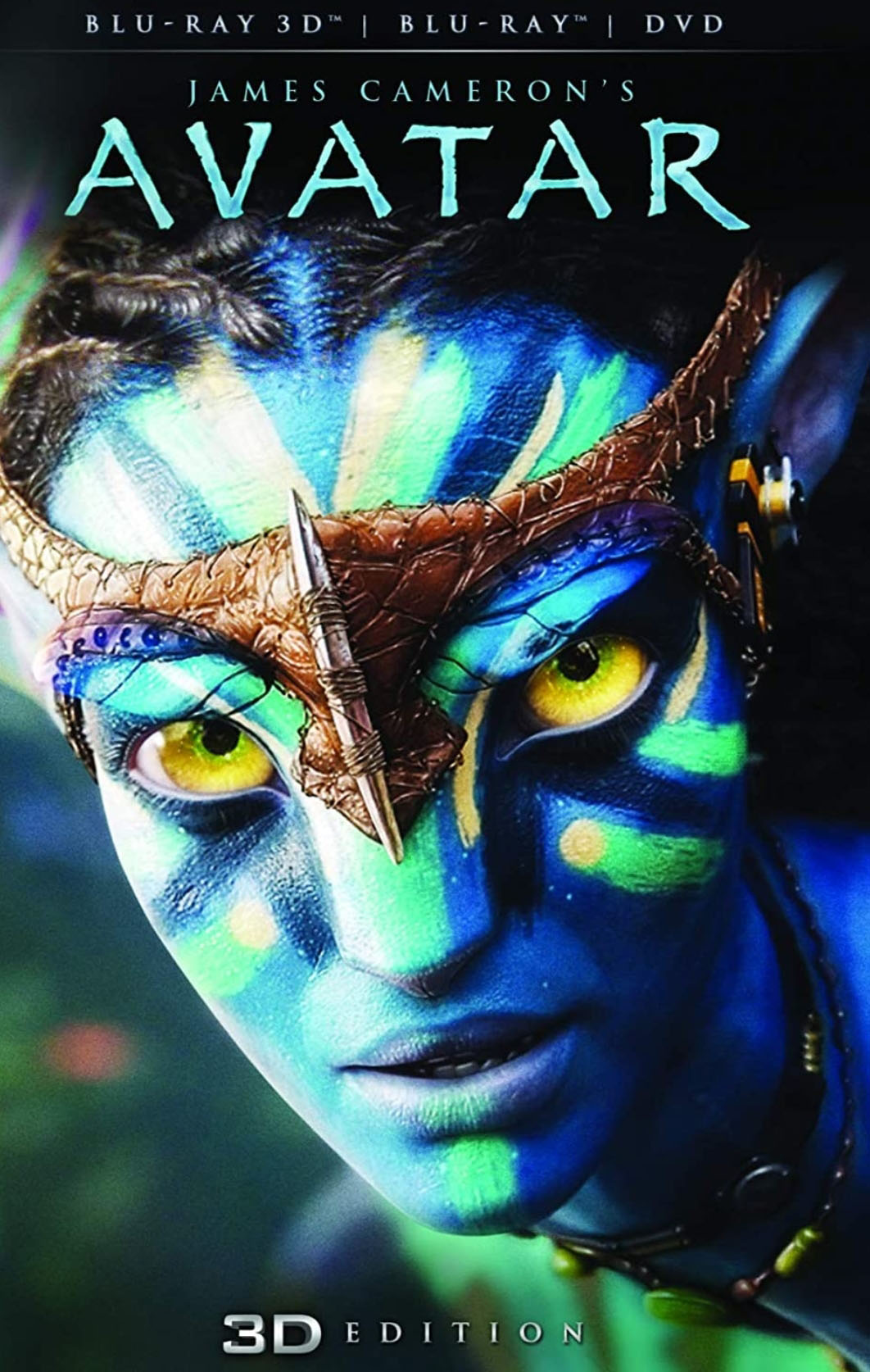